Home » My Blog » Uncategorized » AN ARTICLE ON "THE SHOALS OF HERRING." AND I'M QUOTED!

It’s hard to imagine two more different places than New York and Great Yarmouth, but a film set in one is helping to revive interest in a song about the other.

Inside Llewyn Davis, the latest movie by Joel and Ethan Coen, is a moody portrait of the US city’s folk scene in 1961.

In one scene, young singer Llewyn Davis, played by Oscar Isaac, picks up his guitar and plays to his father, a former seaman now suffering from dementia, a song that had once been a favourite of his. 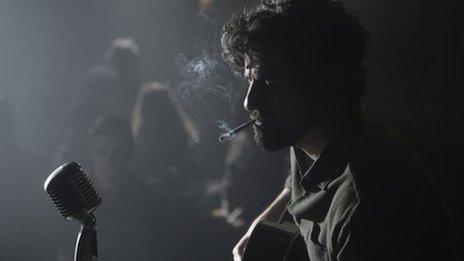 In the latest Coen Brothers movie, folk singer Llewyn Davis, played by Oscar Isaac, plays The Shoals of Herring to his father

“Oh, it was a fine and pleasant day/ Out of Yarmouth harbour I was faring/ As a cabin boy on a sailing lugger/ For to go and hunt the shoals of herring,” he sings.

Some artistic licence is at work here, however. The song could not have been an old favourite of Llewyn’s father, since it was only heard for the first time a couple of years before that film scene was set. 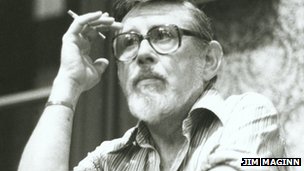 Called The Shoals of Herring, it was written in 1959 by English folk singer and songwriter Ewan MacColl to illustrate the life of Sam Larner, a Norfolk herring fisherman who was a singer himself.

Larner was born in 1878 and went to sea for the first time in 1892. He first sang in public at the age of nine but was not recorded until he was in his 80s.

MacColl wrote the song for “Singing the Fishing”, the third of eight BBC “Radio Ballads” first broadcast in 1960. It was a musical documentary in which Larner talked of his life at sea.

Herring fishing was once a major industry in Yarmouth and along the east coast of England and Scotland.

The town began life as a sandbank, later growing to become the world’s largest herring port.

Singing and jokingRecords from 1334 show that it raised more money from tax than most other towns in England, apart from York, Bristol and Newcastle. Its wealth was based entirely on herring fishing. 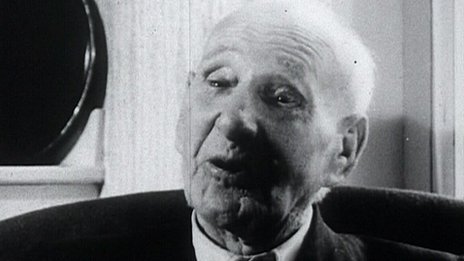 Scottish fisherman followed the migrating herring down the coast to Yarmouth, arriving each October or November.

Women known as fisher-girls came with them to gut the herring, getting through as many as 30 per minute.

Despite working long hours in cold, wet conditions on the quayside, the “girls” had a reputation for cheerfulness, singing and joking as they worked, and were popular with the locals. 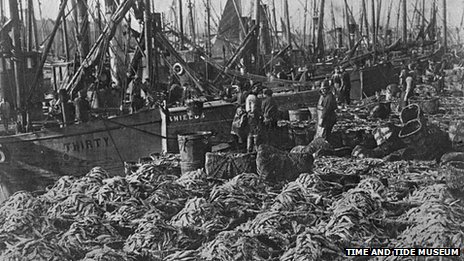 “People remember them as fondly as their own family,” said Miss O’Donoghue.

“They stayed in people’s homes and for the two weeks or so they were there, they provided income for the people of the town. The cultures blended very well.”

‘It’s wonderful’Its demise gives the song from the movie an added poignancy. 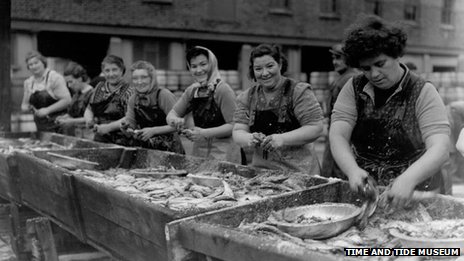 “It’s wonderful to have the fishing industry in Yarmouth mentioned in such an iconic film,” said Miss O’Donoghue.

But what of the man who inspired the song, and was known to sing a few himself?

One of nine children, Larner picked up his songs from other fishermen and performed them in pubs and parish concerts.

He was 80 when he met MacColl and BBC producer Charles Parker, who recorded him for Singing the Fishing. 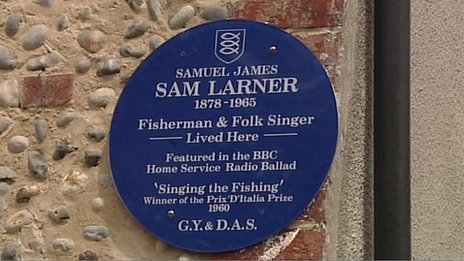 “He had lived through the industry’s golden age when Great Yarmouth had reckoned up the annual catch by the million barrels,” wrote MacColl in 1981.

John Howson, of the East Anglian Traditional Music Trust, was present when a blue plaque was mounted on Larner’s former home in Winterton, near Yarmouth, in 2008.

“He was important because he was one of the singers discovered as the ’60s folk revival was coming together,” he said.

‘Who’s quibbling?’And The Shoals of Herring itself?

“It’s become an incredibly well-known song. You see it in books now, accredited as ‘traditional’, and of course, it’s not,” he said.

“It’s a very typical Ewan MacColl song. He did write some great songs – The First Time Ever I Saw Your Face, for example.

“The fact that it’s been used out of context in this film makes it a little flawed, I suppose. It would have been more sensible to use a traditional song.”

The song is his favourite.

“Now, you might wonder why a boy growing up in the suburbs of Northern Virginia would find himself so touched by a song about the life of a fisherman of Great Yarmouth on the North Sea coast of the UK,” he wrote.

“It’s confused me too. But the song has always moved me.

“Maybe it’s because it describes so well the work and toil of life in general.”

More on This Story

RUN BY THE BBC AND PARTNERS

Published novelist - living in South Pasadena, California with his wife Dawn and his daughters Skylar and Celia.